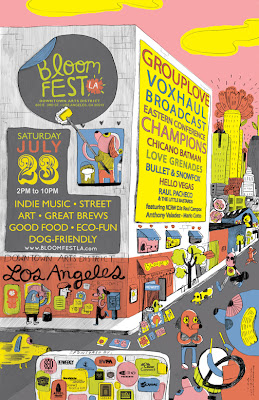 A couple decades ago, I shared a loft on Traction Avenue with photographer Shane Sato. The loft was a couple blocks east of Honda Plaza, an area which used to be a wide expanse of vacant parking lots and a whole lot of nothingness.

But on the corner just down the street from Al's Bar, Joel Bloom sold a few bits of merchandise, mostly cigars, cigarettes and other smoke paraphernalia. Mr. Bloom was a cigar aficionado and had the deep baritone voice to prove it. He was a really nice man, from what I remember of him. He died about 5 years ago.

In his memory, and in the spirit of this little strip often known as the Downtown Arts District, BloomfestLA was born and starts at 2pm today and goes until 10pm.

A bunch of food trucks have just pulled into the area as I write, including one Ludo Truck in all its red-and-black rooster glory. Go stand in line for an hour or two, why don't ya? 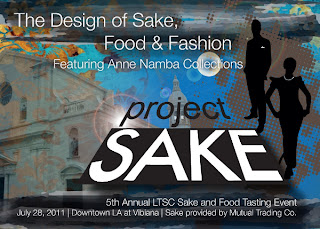 In its 5th year, Project Sake is the Little Tokyo Service Center's annual sake- and food-tasting event. Dozens of restaurants will offer tastes from their menu, and many dozens of sake bottles will be offering something to wash it all down. A fashion show will be presented by Anne Namba, and many other locally grown and concocted crafts will be on display and/or for sale.

Every year, this event gets sold out, so don't wait till you get to the door to get your tickets.
Posted by LT Goto