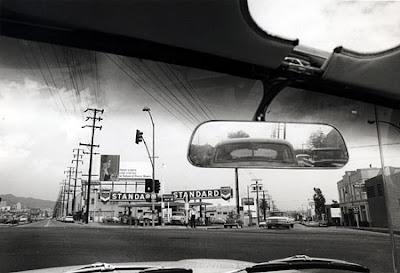 Double Standard, the Dennis Hopper retrospective now showing at the Geffen Contemporary at MOCA, is also the title of one of the late actor/artist's most-known photographs. It depicts an intersection at Melrose and Western avenues and captures an array of details from the perspective of a driver in a convertible in 1961 Los Angeles.

The exhibit continues through September 26 and it's notable for many reasons. One, many of Hopper's photographs in the exhibit are of the contemporary artists he rubbed elbows with, including Andy Warhol, Jasper Johns, Marcel Duchamp, Robert Rauschenberg, Claes Oldenburg, Roy Lichtenstein and many others. What's interesting is that these artists are also part of the permanent collection at MOCA on Grand Avenue and the Hopper photographs provide a bit of informational spray mount for them. A second reason is that Hopper was "significantly" involved in the planning of the retrospective, curated by Julian Schnabel, before his death on May 29, 2010, just five weeks before the exhibit's opening.

Your ticket at either location provides entry into both, not to mention bus fare for the MOCA Shuttle that runs between them every 20-30 minutes.

Tickets are $10 for adults. See the museum website for hours and more detailed information.
Posted by LT Goto