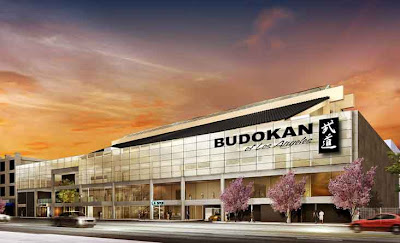 As we’ve posted on this blog for the past couple years here and here, members of the Little Tokyo community have been fighting to establish a multipurpose community recreation center that would bring young people, families, and communities together from throughout the Los Angeles and Southern California area.

The Budokan of Los Angeles (BoLA), formerly the Little Tokyo Recreation Center, has just celebrated a major milestone in the development of a regional sports and community facility in Little Tokyo that would host basketball tournaments, martial arts tournaments, and other activities. The biggest struggle (and wait) has been in the signing of the Memorandum of Agreement (MOU) between BoLA and the City of L.A. 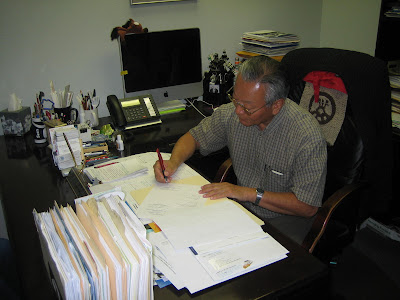 We have some very exciting news to share with you regarding the MOU. The photo above documents Bill officially signing off on the MOU yesterday afternoon, along with signatures from Councilmember Jan Perry, Gerry Miller (CLA) and Carmen Trutanich (City Attorney), which will finally complete the MOU phase (it only took 1 year and 1 month). As you know, the City Council approved the MOU back in Sept 2008 and we were hoping to move through the process fairly quickly until the economic downturn hit. But, thanks to the efforts of Councilmember Jan Perry's office, we now are able to move to the next stage and are getting closer to being able to make the dream of building the Budokan a reality.

Upon completion of the MOU, we are now going to start working with the City on executing a ground lease for the site. In the coming weeks, we will be receiving a draft of the ground lease and will begin to review this document and provide our feedback to the City. As I mentioned previously, this document, upon final agreement between LTSC and the City, will allow us to completely move forward and begin raising funds and constructing the facility. We anticipate our negotiations with the City on the ground lease to last to the end of the year, so we hope to be able to make a major announcement as soon as it is complete and launch our capital campaign in early 2010.

Again, we wanted to thank everyone for their continued support and patience. While it has been a long road, with a lot of detours along the way, we now believe we are getting closer to the final destination. In the coming months, we will keep you updated and we hope to have some more exciting news towards the end of the year.

This is a pretty significant event, and for those of us who've been involved with the efforts to build a recreation center, a great relief in the ability to move forward.
Posted by davis