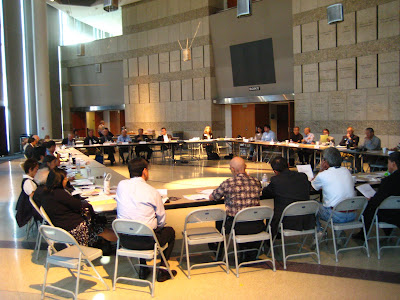 Following the release of a statement by Senator Inouye at the last Little Tokyo Community Council meeting that reflected the multiple community concerns over the potential impact of Metro’s regional connector, and on the suggestion of the mangrove property developers, the LTCC members overwhelmingly approved a motion for Metro to consider adding a fifth option that would establish an underground station under the Gold Line at the Nikkei Center property.

The following statement was approved by the full council (amended wording is in italics) at today’s monthly meeting:

The Community Council is in favor of continuing the Underground Emphasis Option, which currently tunnels underground at 2nd Street, by continuing tunneling under 1st & Alameda and providing Little Tokyo with a station under the present Gold Line Little Tokyo / Arts District Station, subject to the approval of the Nikkei Center, LLC and respecting the property and integrity of Nishi Hongwanji Buddhist Temple. This would also save merchants and property owners adjacent to 2nd and Central (Office Depot block) from years of construction disruption.

Among the few concerns raised included questions about the actual feasibility of building such a station, and whether or not the underground option would actually function as a terminal station that would require passengers from other rail cars to transfer to Gold Line trains. Other members were worried of the impact of this new option would have on 2nd Street businesses and the Nishi Hongwanji Temple.

LTCC Chair Bill Watanabe, however, made it clear that the board’s motion was drafted to urge Metro investigate a fifth alternative, and did not represent an endorsement nor a preclusion of any of other proposals thus far presented by Metro.
Posted by davis