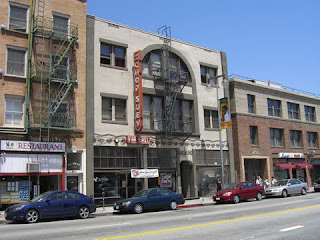 I was just thinking of Far East Cafe on First Street in Little Tokyo and how my family used to go there every month when I was growing up. Old timers remember family gatherings, weddings, and funerals. Growing up as a kid in the suburbs, I actually wasn't crazy about the food or the place, but my dad loved it, so we went on the 2nd Sunday of every month. We would meet my Issei grandma, who would cross the street from Koyasan Buddhist Temple to meet us for dinner.

When I got older, I would often complain about going... it's one of those places that you don't appreciate until it's gone. It closed in 1994 after the Northridge Earthquake. Nowadays, people young and not-so-young hang out at the Far Bar and Lounge.

In a parallel universe, my husband grew up loving the food, going with his family from Sawtelle. Here's a poem he wrote a decade or so ago, that speaks to his love of Far East Cafe and chinameshi cuisine.

almond duck
cradled by lettuce
spruced up with nuts
born from hard times
scraps of duck meat
pressed between heaven and earth
working peoples’ salvation--
with gravy
my father says,
Almond Duck?
as hard to describe
as the grand canyon’s beauty