Metro will be making a presentation of its regional connector plans to the Little Tokyo Community Council at LTCC’s monthly meeting on Tuesday, September 22 at 12 PM. It will be displaying a model of their proposed option for an at-grade design at the intersection of Alameda and Temple, an alternative plan being considered alongside their 1st and Alameda option.

Over the Labor Day weekend, the MTA also ran two to three simultaneous Gold Line trains along the Extension at vehicular traffic speeds. Metro is a little behind on their projected schedule of opening the Little Tokyo / Arts District Gold Line station in August, and unfortunately, they now won't provide a specific, let alone ballpark, date for full operation.

The MTA also released copies of fliers (in English and Spanish) that will be provided to “Rail Safety Ambassadors” and distributed to local schools. 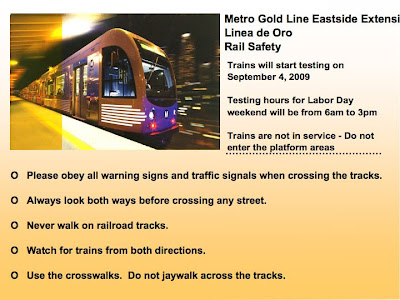