I have to admit, I really had no idea what the Tanabata Festival was about. But, I had been hearing a lot about it, so I decided to go check it out at the opening ceremony on Friday night. My daughter and I walked down to First and Central, and got there about midway through the program. A bunch of dignitaries, getting ready to break open sake barrels. Emcees in both English and Japanese. Hmm, still didn't quite know what it was about. 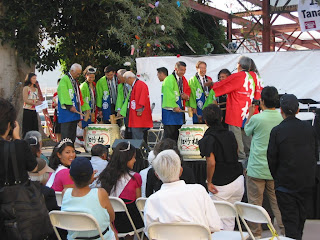 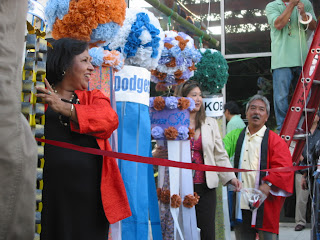 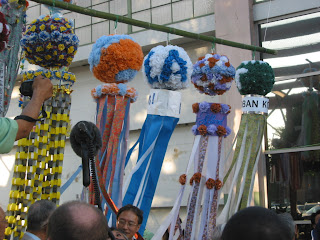 Raising of the Tanabatas. Then we all got to walk through them, look up and take pictures. What was really nice was seeing all the community friends and people we knew walking through, kind of amazed at the beauty and originality of each of the pieces. I love that groups of people created their own, using different colors, styles and materials. Each one a little bit of creativity. There were 230 in all, some made by families, kenjinkai groups, individuals, community organizations, dance groups. 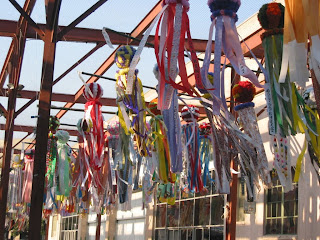 Of course we ran into our friend Nancy Kikuchi, one of the 2009 Tanabata Committee members, who is involved in just about everything in Little Tokyo. In fact, I think we should dub her "Ms. J-town." Nancy told me about how this was the 1st Annual Tanabata Festival in Los Angeles. I thought that was a great idea, great for bringing people together, and giving just another reason to come out to the Nisei Week Festival, which I admit that I haven't really been to in several years, even though I work in Little Tokyo and my daughter's preschool is here too. Nancy also told me that the 10 biggest displays were from Sendai, in Japan, and that a company had shipped them to Tokyo, and that Mutual Trading put them in a container and had them shipped to Los Angeles. 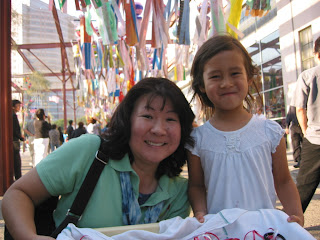 All in all, I think it was a big success. I think next year maybe I'll try to join in and get involved in making one too.
Posted by Jenni