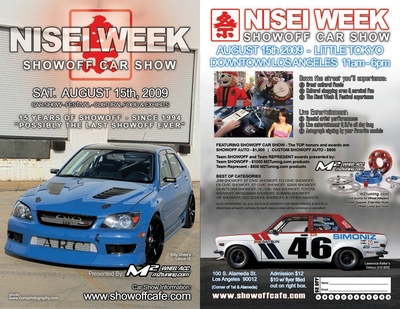 The Annual Nisei Week Car show is this Friday August 15th from 11-6pm, admission is $12 at the door and kids under 10 are free.

This is the place where the top-notch show cars come out to compete and show.

This year the all day event features:

SHOWOFF CAR SHOW - West coast's top show cars compete for cash prizes and trophies. This is the place where function, quality, and form counts. Overall Winner wins $1000.00 and 6ft trophy with all bragging rights. Custom Showoff (runner up) receives $500 and 5 ft trophy. We have over 350 of the finest show cars so don't miss out!

LIVE ENTERTAINMENT - An all day array of stage acts including Hip Hop, R&B and bands. PLUS! To tease the eye some of the hottest industry models with their hot autographed posters and much more.

Parade Participants with Permits are allowed to park in Lot 7, next to East West Theater