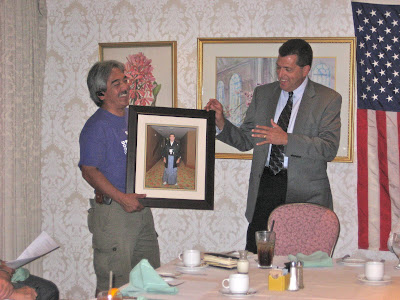 Yesterday I attended the Little Tokyo Public Safety Association Meeting. It was held at the Kyoto Grand Hotel in Little Tokyo. The Little Tokyo Public Safety Association or LTPSA, meets every month to discuss public safety issues in Little Tokyo. Members are from various places around the community, from residents, to business owners, community organization representatives, the Koban and LAPD.
Members had the option of dining at the Azalea Restaurant and Bar inside the Kyoto Grand before the meeting. It was a buffet, that had a good salad bar, and nice selection of meats such as beef steaks and ribs. A good place to eat if your in Little Tokyo, open for breakfast lunch and dinner.
The meeting consisted of reports and updates from members of the committee. I will summarize the issues that where discussed at the meeting. For the area report, one grand theft auto was reported at 2nd & San Pedro St, one strong arm robbery on the outskirts of Little Tokyo and Citi Bank was armed at gunpoint on July 10. LAPD officers present at the meeting, discussed the issue of bank robberies in the Little Tokyo area and dissolved any concerns of it as a current major issue. One of the officers stated that 85% of all bank robbers are caught, and another stated that banks put human safety as their highest priority.
Graffiti and Tagging in Little Tokyo was addressed as it currently exist at a low level but is not currently a pressing issue. Issues of homeless in the area where also addressed, also nothing pressing to report.
The Little Tokyo Koban reports efforts of working with the United States Census, a team effort to help each other out. The Koban will provide services such as use of meeting rooms, promotion and outreach while in return the Census provides financial support towards community events such as Nisei Week and Tanabata Festival. The Census is very interested in collecting more data on Japanese living in the area. Japanese currently make up the smallest group that the census receive information from.
Other news include starting July 31 all festivals are required to have permits and pay administration fees. $6.31 for each parking sign as well and $310 for street closures give you an idea of what to expect. How this will effect future festivals in Little Tokyo is to be determined.
The Little Tokyo area also also has two new Senior Lead Officers for the area Officer Kenny Lew, and Officer Tim Nambu. Together they are responsible for about 50% of the Central district, including but not limited to Little Tokyo and Chinatown. They replace revered former Senior Lead Jack Richter who is pictured on top receiving a photograph to help remember his time spent serving Little Tokyo. The two new Senior Lead officers are excited about Little Tokyo and passionate about serving our community. The LAPD also promoted their explorer program which is a youth program targeting at individuals 14-21 interested in a career with the LAPD. It is a 12 week program designed to help youth and foster interest in a career with the LAPD, if you or anyone you know is interested please contact Officer Wapp at 32523@lapd.lacity.org.
Disclaimer: The information presented here is accurate to the best of my knowledge, if you notice anything incorrect or have any concerns or suggestions please contact me at moguro@ltsc.org. Thanks.
Posted by M.Oguro