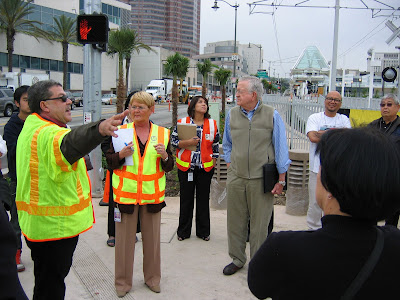 About five MTA representatives and engineers were on hand to field questions from a couple dozen community members about pedestrian safety and access around the Gold Line light rail station, which is slated for full operation sometime in August. 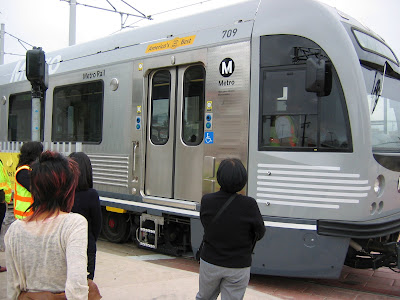 Upon walking up to the track crossing at the NE corner of 1st and Alameda, one is immediately struck at how "open" the crossing is, with little to keep a pedestrian from accidentally walking or falling over the tracks at an oncoming train (by the way, it's a $500 fine to walk on the tracks...but who reads signs when we're in a rush to catch a train or make the light?). 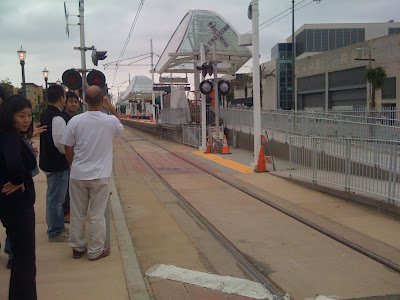 Many in the group were equally dismayed at the lack of barriers or gates to prevent an accident. MTA staff assured us, however, that gates are being evaluated, and that a study on the issue will be released in July or August...and there will be an opportunity for public comments.

The other questions that came up time and again were the lack of language-appropriate signage (some of the signs that were up did have Spanish translations). Many in the group expressed concerns over how local Japanese and Korean residents, most especially seniors, would be able to read the warnings. The MTA is also going to take into account the timing of pedestrian lights to enable seniors sufficient time to cross sidewalks.

Members in the group pointed out a lot of confusing designs and safety systems, so the walk-through was informative for both community members and the MTA staff. At the request of the participants, Metro representatives will be making presentations to the Little Tokyo Community Council and other groups, and will incorporate the comments and feedback from yesterday's meeting to the station's overall safety plan.
Posted by davis