FREE Outdoor screening on the JACCC Plaza! This Friday! 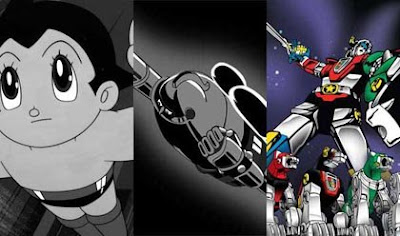 Remember Astroboy, Gigantor and Voltron: Defender of the Universe? These three robots have been  protecting the universe over the last half century and now is your chance to see them!
If you remember them then this is just the event for you! If you don't this is the perfect time to get to know them!
So bring your blankets and your appetite, there will be vendors such as Franken's Vegan Hot Dogs, All American Softy | Coffee and pretzels and Sushi Popper.
This Robot Trifecta will be playing this Friday June 26th starting at 7:30PM at the JACCC Plaza in Little Tokyo.   Located at: 44 South San Pedro Street (between 2nd and 3rd Streets) Los Angeles (Little Tokyo), CA 90012 (213) 628-2725
The event will also feature a  Live Soundtrack REMIX of VOLTRON by DJ's Rani D, Akaider and Refine!
The event looks like classic summertime fun, bring all your friends, blankets, get ready for the Robot Trifecta!
You can check out the trailers by following these links, or read a quick description below:
Astroboy
Gigantor
Voltron

The mother Japanese animation, Astro Boy was the first anime series to be broadcast on TV in Japan. The story follows the adventures of a heroic robot named Astro Boy which originated from the mangaof the same name, created by legendary Tezuka Osamu. ]

Set in the "future" year of 2000, Gigantor is the story of a young boy named Jimmy Sparks who lives with his uncle Dr. Bob Brilliant on a remote island. With the help of a huge remote controlled robot named Gigantor, Jimmy fights crime around the world. Gigantor is the American adaptation of the Japanese anime and manga series Tetsujin 28-go by Mitsuteru Yokoyama. [

A team of five young pilots command five robot lions, which when combined form Voltron. In this undefined future era, the Voltron Force was in charge of protecting the planet Arus (ruled by Princess Allura) from the evil King Zarkon (from planet Doom), his son Lotor, and the witch Haggar, who would create huge Robeasts to terrorize the people of Arus.