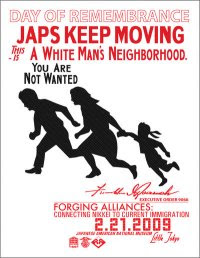 The Day of Remembrance is held each year to commemorate President Franklin Delano Roosevelt's signing of Executive Order 9066 on February 19, 1942. EO 9066 authorized the unconstitutional forced removal of 120,000 Japanese Americans from the west coast and Hawai'i during World War II.

Mass incarceration of Japanese Americans was accepted by the majority of US Citizens because of the racial prejudice that existed toward a community of immigrants. Alien Land Laws prevented Japanese Issei's the right to own land, anti-miscegenation laws prevented them from marrying outside their race, and the "American" community was generally unwilling to incorporate these immigrants into mainstream society. Now 67 years later, this same prejudice and stigma around immigration still exists. The 2009 Day of Remembrance program will commemorate Japanese American immigration while creating connections to the current day debate. The program seeks to forge alliances and stand in solidarity with a new generation of communities working towards positive change in immigration reform and integration in a new America.