Premiere of a Song for Ourselves 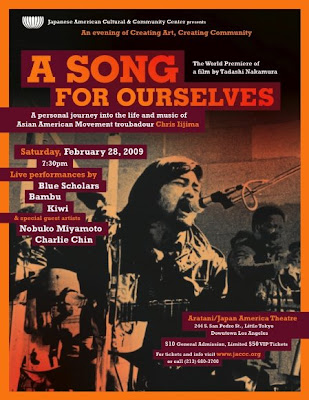 During the 1970s when Asians in America were invisible to the country—and more importantly even to themselves—the late Chris Iijima’s music provided the voice and identity an entire generation had been in search of. Through animated photographs, intimate home movies, archival footage and Chris’ own songs, A Song For Ourselves shows how Chris’ music unleashed the contagious energy of the Asian American Movement with an unrelenting passion for social justice and a life well lived. This film immortalizes Chris’ inspiring songs that have been and will continue to be sung by generations of activists young and old.

Statement from the Director, Tadashi Nakamura:

The Asian American Movement not only worked for social justice, it created the community into which I was born and raised. When I asked what the early Movement was like, my mom simply played an old record for me. This was my first introduction to Chris Iijima. When I got to know Chris myself, rather than seeing him as an OG from the past, I looked up to him as a role model for the present. When Chris got sick, the community that was created over thirty years ago came together from all parts of the country to care for him and his family in a way that

made me realize the lasting power of the Movement. A Song For Ourselves is my attempt to capture the essence of this community I am grateful and proud to be a part of.

You can find a link to Tad's blog about the film making here.