LT is Bronzeville, taiko and community

Did you know that the "Home is Little Tokyo" mural on Central Avenue at 1st Street is made up of 20 separate 4 foot X 8 foot plywood panels? Here is one of the panels from 5 years ago when it was in development. 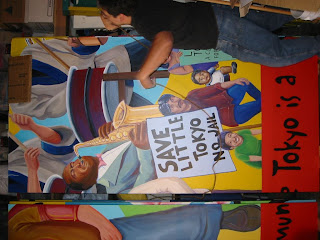 I like this one. It shows the "No Jail in Little Tokyo" effort where the community successfully gathered thousands (I think it was something like 13,000) of paper and online petitions to stop a 500-bed jail from being built on what was known as the Mangrove site at First and Alameda, future site of Nikkei Center.

It also shows an image of Charlie Parker, jazz musician from the World War 2 era when Little Tokyo became known as "Bronzeville." At top, are drummers from Bombu Taiko, out of Higashi Buddhist Temple on 3rd Street between San Pedro and Central Avenue.