On September 23, 2008, the Los Angeles City Council approved a memorandum of understanding (MOU) with the Little Tokyo Service Center to build a multi-use facility for sports and community activities in Little Tokyo, just east of Downtown Los Angeles. This vote, years in the making, gives LTSC and the Recreation Center Coalition the green light to move forward with the Little Tokyo Recreation Center as envisioned by hundreds of supporters over the past decades!

“The Little Tokyo Recreation Center will be an important addition for the Little Tokyo community and for the entire Downtown area, because it will not only add much needed recreation space, but will also serve as an important economic engine and have an immediate impact on local businesses in the area”, said Councilmember Jan Perry.

Rightfully, there is much excitement about the passage of the MOU for the Little Tokyo Rec Center site, after SO many years of rallys, san tai sans, and city red tape. But the story is still amusing, here it is: 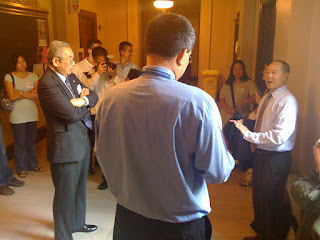 On 9/23/2008 a throng of Rec Center supporters from all over Little Tokyo descended on City Hall Room 340 for the City Council Meeting that would pass the Memorandum of Understanding allowing for the construction of the Little Tokyo Recreation Center. There was excitement int he air, after all this was for the REC CENTER!! AFTER 10+ LONG YEARS! 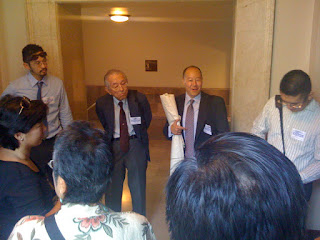 Those supporters then marched into city hall at about 12pm (after passing through the metal detector) and barged into the doors of Room 340 ready with banners and ready to cheer for the city council's decision. But as they listened most of the items being discussed were of later agenda items......

At that point Councilwoman Jan Perry's assistant came over and said "actually.... they passed the MOU about 10 minutes ago by consent...."

So funny story (slightly anti-climactic), we all headed over ready to hear the passage of this MOU only to arrive 10 minutes late. BUT, there was one person from LT present, that was Bill Watanabe (he got there at 10:30, just in case). I can't think of a person that should have been there more than him, after 10+ years of san tai san's and rec center meetings etc. congratulations Bill and congratulations to the COMMUNITY!!

1. Mangrove
2. Rec Center
3. What's next? and is Little Tokyo's future starting to look pretty bright?? I think so.

UPDATE: Here's an L.A. Times link to the story.
Posted by Craig Ishii