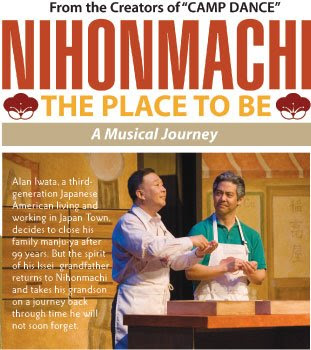 Our friends over at Nishi Hongwanji Temple are having a performance fundraiser featuring Nihonmachi: the Place to Be. The musical made its debut in San Francisco in 2006, and has since made its rounds in San Jose's Japantown and Little Tokyo.

I had a chance to see it when the play helped raise money for the Little Tokyo Public Safety Association earlier this year, and which also celebrated Brian Kito of Fugetsu-Do. The story is loosely based on his life and his 105 year-old manju-ya.

I'm not a big musical fan, but I did enjoy watching Nihonmachi. It's campy, funny, and sends some pretty important messages about family, history, and urban development. Go check it out.