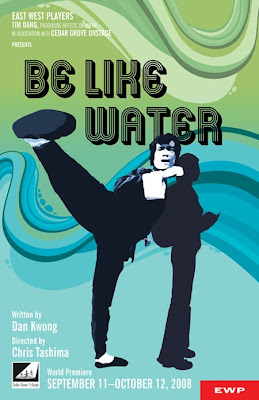 I saw a great play in Little Tokyo the other night. The play was written by Japanese-Chinese American performance artist Dan Kwong in his first time out as a playwright. It was my first East West Players show in several years and I have to say that it was fantastic.

Things I loved about it were the 13 year old heroine played by Saya Tomioka, a terrific script, energetic dancing and choreography mixed with some impressive martial arts, cool 70s era clothing, funky music from back in the (my) day. tear-jerking mother-daughter drama (yes that was me sobbing in Row F), and hilarious comedy (something to expect when watching Dan Kwong's work... and look out for the young and fresh Shawn Huang),

Anyways, if you are a Bruce Lee fan, or wish you had been a kung fu-fighting teenage girl dealing with growing up, racism and her dysfunctional family, come down to Little Tokyo to check it out. Get your tickets now, cause the show I was at was a full house. Opening night is Wednesday, 9/17 and it runs through 10/12.
---------------------
BE LIKE WATER

Chicago, 1978. Disco rules. Five years since the tragic death of legendary martial artist Bruce Lee. Tracy Fong is a 13-year old ass-kicking, gung-fu fanatic tomboy, challenged by school bullies, airhead rivals, and a mother who just wants her to be a "normal" girl. When bad goes to worse, the Ghost of Bruce Lee appears to teach her the true meaning of strength and the true power of water.