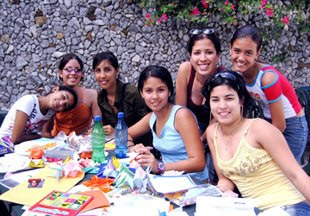 Did you know there are about 1,300 Nikkei currently living in Cuba? Although their numbers are small, Nikkei can be found in every province of Cuba with the largest concentration in Havana.

In 2001, Nikkei for Civil Rights and Redress organized the first group visit by U.S. Nikkei to the Nikkei community in Cuba, and celebrated Obon with the small community on the Isle of Youth. In 2005, Tsukimi kai organized northern California Nikkei to bring taiko performances to Cuba and again celebrate Obon. Tsukimi kai returned in 2006 to break the blockade with mochi and celebrate Oshogatsu, this time bringing a shiisaa (Okinawan Lion). In 2007, Choodee without orders brought Okinawans in the U.S. to Cuba to celebrate the 100th anniversary of Okinawan migration here. Come learn about the parallels between Cuban and U.S. Nikkei history and the creativity of the tiny Nikkei community as it struggles for cultural survival.