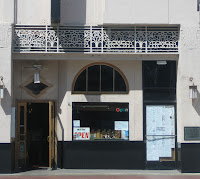 And by that I mean "random access memory" in the most literal sense. (Hmmm... I am also an Aries, so I guess it works on a couple of levels)
But that is also the best description of what I will be bringing to this blog. I am a third generation, native Angeleno who has been working in Little Tokyo intermittently over the past seventeen years - the past nine have been consecutive and at the same place - an all time record for me. My maternal grandfather was in the wholesale produce market before the war, so Little Tokyo featured prominently in family life. But it wasn't until the early 60s when my family moved to Silverlake, that going to Little Tokyo became a part of my own life. Before then it was too far to drive from the Crenshaw area, and unnecessary since there were enough nikkei businesses to sustain us nearby.
My connections and reflections of the area are intermingled with my mother's past. She worked at the JACCC for 12 years spanning the 80s and 90s. So much of her memory was refreshed as she spent time reconnecting with a community that she had separated from for 30+ years following the end of WWII.
On the rare occasion that I actually get away from my desk and roam the streets of LT, every building I pass exists in two or three layers - ghosts of businesses that once existed there along with shadowy scenes of events or experiences.
For example, (and pardon me if I am vague with the most recent dates - time moves too fast) about seven years ago when Tsunami opened (it is now called San Sui) I went in to talk to the new owner about a potential partnership. When I walked into the building, I was struck with the memory of the many times my mother would order take-out sushi from the former owners. It all came rushing back to me - how she would call in the order and drop me off while she circled the block (parking was terrible even in the 60s). Sometimes she would find a spot and come in and wait with me. We always ordered the same mixed box of futomaki and inarizushi. (My mother hated fish and I didn't even know that sushi meant raw fish until I was in my teens. ) Always included were two futomaki with beautiful scalloped tamago borders. I felt entitled to at least one of them, since I assisted Mom with dinner pick up. She usually ate the other.
The then new owner of Tsunami pointed out the architectural elements of the original restaurant that he chose to keep and which I only vaguely remembered. The one thing I did remember was that the entrance was shielded from a direct view of the street by a bamboo and brush gate. The gate always gave me a sense that I had entered a safe space. I don't know why but I found it magical and comforting.
I am hoping as I spill these memories out in this blog that people will help me fill in the gaps with their own recollections with the proper names of businesses and dates. But I am not one of those people who only longs for the past. There are things I like about the way LT is changing. Exploring the various shops and markets are a wonderful revelation that we have not become too homogeneous in Los Angeles. At one time, during the early 80s, it seemed that more of the shopping was aimed at visitors from Japan, and stores were stocking more generic Los Angeles souvenirs and a lot of high-end designer fare. Now stores are more Japan-centric than ever, and you can find items for home and kitchen that you wonder if tourists would have the faintest idea of what they are.
So look for a mixture of musings in the future.
Posted by Kagami