If you ever go by the Little Tokyo Shopping Center (Mitsuwa Plaza) located at the corner of Alameda Street and Central Avenue, there's a sculpture of a hand holding a torch. On the sides are engraved "Life", "Hope", and "Peace" in English and in Japanese (kanji). 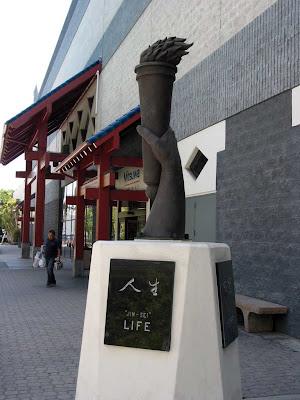 I've passed by it on numerous occasions rushing from the market to the parking garage, but rarely took time to read the plaque. This afternoon, I read it a bit more carefully. Hmmm... 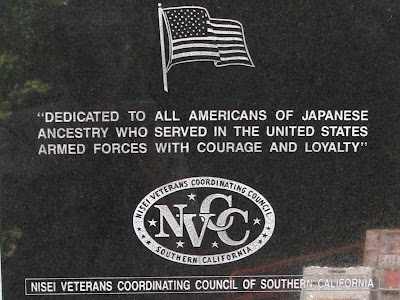 The sculpture (by artist Marlee Wilcomb) was sponsored by the Nisei Veterans Coordinating Council of Southern California. (Does anyone know more about the history of this memorial?)

Like many Japanese American families, I have Nisei (second-generation American) relatives who have seen combat in WWII and the Korean War. They are aging; and some of them have recently passed away. One uncle still likes to tell his war stories of artillery fire and walking among the dead, but some veterans like my dad never talks about it. "War isn't something to glamorize," he says... 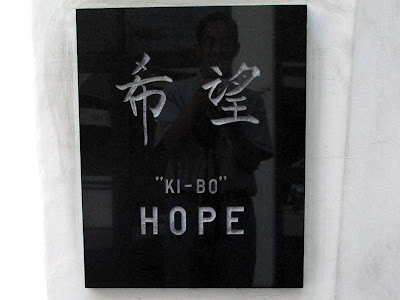 Not far from here, I recently passed a Caucasian man on the street. He was asking for directions. But then he became quite angry when the people he asked couldn't speak English. I happened to be walking by when he shouted that he was an ex-Marine who fought for this country, and it was because of "you people" (Japanese?) "that America is going downhill!"

How I wished I could have explained to him the entire history of contributions from all American immigrants! So for some reason today, it was really nice to note this small sculpture honoring Japanese American veterans at this unexpected moment, at this unlikely place, next to the Mitsuwa supermarket -- only in Little Tokyo! 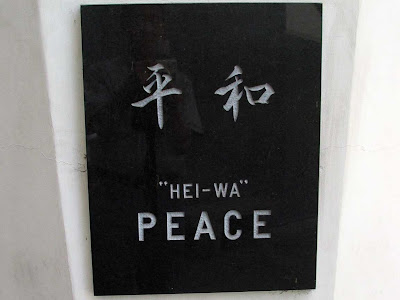 In many ways, the torch of life, hope, and peace is being passed on to us, so let's ensure that the flame continues to burn brightly for future generations.
Posted by WEb