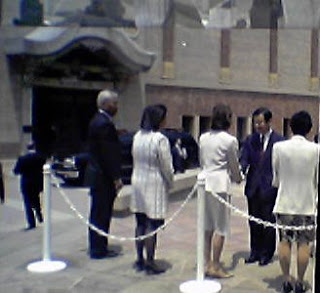 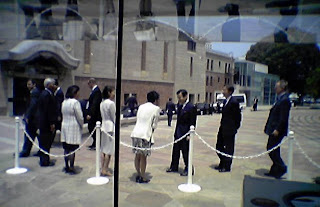 Nothing like a week of preparation for a one-hour visit from royalty to make one realize that life on the other side of the bloodline is truly stressful and time-consuming. And not just for the royal figures, but also for all those who work around them and tend their affairs.

The Crown Prince’s unofficial visit last Thursday, came during a period of high activity at JANM. It was hinted at three weeks ahead of time, just before Chado’s grand opening. By the approach of following weekend (which was the opening of Living Flowers), the visit was confirmed.

Our first official meeting with the members of the Japanese Consul who were in charge the visit, was organized by Yuko Kaifu, formerly of the Japanese Consul staff and recently Vice President of U.S. – Japan Relations at the Museum. Even at that time, one week before the visit, we were not officially supposed to know who the VIP was. As Director of Visitor Services, I attended the meetings to provide input from that department.

The Japanese Consul staff was a surprise to me. While I expected professionalism and courtesy, I didn’t expect the warmth and humor that they brought to the meetings. It was not what I had grown to expect from stories of how rigid and intense the Japanese business world can be. It just goes to show that pre-judgments of all kinds are doomed to error.

I was in charge of finding JANM staff to volunteer for various positions such as door openers, press monitors, guest handlers, etc. Unfortunately the choices had to be made quickly, and so when I looked around at who was still at work late on Friday afternoon, I didn’t have a lot of choice. Many staff were preparing to leave for the Enduring Communities conference in Denver (another major Museum project for this summer) and wouldn’t be able to attend the meetings required before the visit.

I gave some thought as to having staff who could speak Japanese, and there was at least one bilingual person per task group. But if I had thought about it more carefully, I would have also thought to ask staff to whom seeing a member of the Japanese Royal family would have been more meaningful. (My apologies to those who didn’t get to participate in the visit – unfortunately any staff not working on the reception line that day was not allowed to gawk.)

My specific role was to act as escort to a group of Japanese delegates accompanying the Crown Prince in his car, but who were not planning to walk through the exhibition with His Imperial Highness. The tour of the exhibition was to take a half an hour and was followed by the Crown Prince addressing an audience of about thirty invited guests. At first I was told there would be fifteen delegates. The day before the visit the number had dwindled to six. Only three actually showed up, and none of them seemed particularly thrilled with their choices of the Museum Store or Chado. In the end, all three ended up spending their time at Chado. At least one of them left with a bag stuffed full of merchandise (an assortment of cookies, I heard).

As the Pavilion was being cordoned off and the public sensed something was about to take place, we could see a small crowd start to gather. Two elderly ladies in particular stationed themselves at the entrance of the Museum’s Historic Building. We think that they knew exactly what was going to happen. At one point the police started to chase people away from that vantage point, and we in the Museum felt sorry that they wouldn’t get to see the arrival of the Crown Prince. But in the end, the police allowed the onlookers to stand in front of the Museum Store.

I paced around the Museum Store straightening merchandise (just in case HIH suddenly broke ranks and said, “Hey, I want to buy one of those talking Yumi dolls for my daughter!”) and kept referring to my cell phone to check on the time. A few of the press corps were milling about in the Store, quite lackadaisical about needing to be in their assigned press stations. As I was thinking that this was a breach of protocol, I suddenly found myself looking out the Store window from behind the press corral and thought of what a great vantage point I had for viewing the arrival. I had a greater field of vision in the Store and was also comfortably out of the sun. And I had my cell phone…

Ms. Kaifu gave us a quick lesson in etiquette. How to bow, what to wear (no purple), not to try and talk to unless approached, how to address and refer to the Crown Prince (never as ‘him’, but always as the Crown Prince or His Imperial Highness), but she never mentioned cell phone photography (which I now understand could get you pounded by certain hip hop celebrities).

So there I was armed with my phone and before I could stop myself, I fired off a couple of shots. As a testament to how rarely I use this feature on my phone, I didn’t realize I had to save the shots before taking new ones. So the only one I had of the arrival was a bad long shot. But I thought I would have another chance when the Crown Prince was leaving as long as I kept a low profile.
Eventually my patience was rewarded and I was able to capture a very clear (albeit low res) shot of the Crown Prince saying good-bye to Yuko, and later shaking hands with our new CEO, Akemi Kikumura-Yano. It was a perfect 21st century souvenir of the royal visit and a perfect shot for a blog.
Posted by Kagami